Bacon is one of the most controversial foods out there. Bacon, along with other animal meats and eggs, is often demonized and said to be the cause of many health issues. However, when you dig a little deeper, you will see that bacon is not the dietary evil it is made out to be. 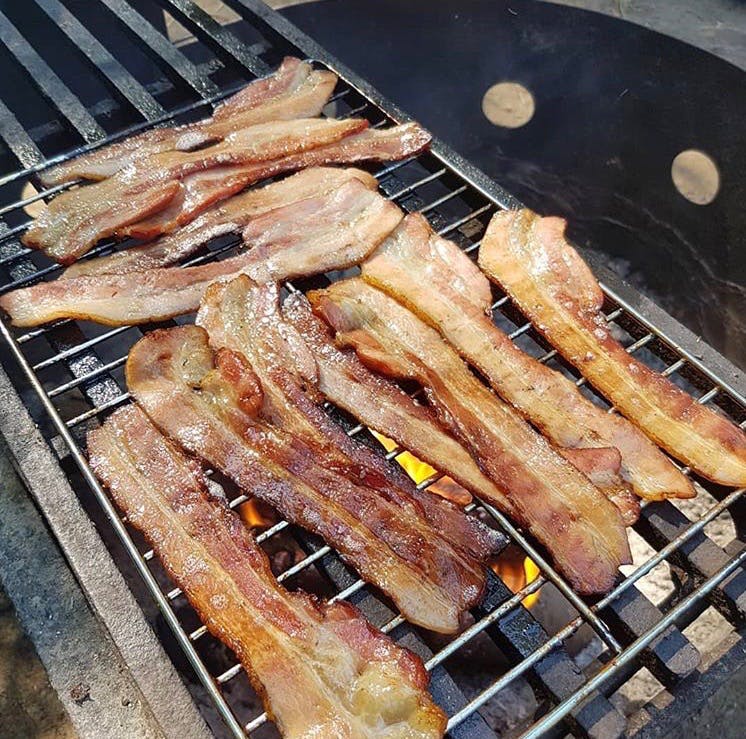 Bacon is one of the most controversial foods out there. Bacon, along with other animal meats and eggs, is often demonized and said to be the cause of many health issues. However, when you dig a little deeper, you will see that bacon is not the dietary evil it is made out to be.

Bacon is primarily made of fat, and that fat is, in fact, monounsaturated fat. Approximately 50% of the fat present in bacon is oleic acid, the same monounsaturated fat found in olive oil. Another 40% of bacon fat is saturated, while the remaining 10% polyunsaturated. Although many people worry about the level of saturated fat in bacon, this is actually one of the benefits of bacon, as it is what makes it stable and unlikely to go rancid in cooking and storage. In fact, saturated fat has now be shown to be far less worrisome and detrimental than originally believed, and dietary cholesterol has very minor effect to blood level cholesterol, if any at all.

Because people are often so caught up in discussing the fat content of bacon, the vitamins and minerals present in it are often overlooked. Bacon from pastured pigs is a source of protein, iron, phosphorus, magnesium, B vitamins, and fat-soluble vitamin D.

But, what about the salt?

Those not worried about bacon’s fat content, are often worried about bacon’s salt content. Although brands and sources will differ, commercial bacon contains roughly 1000 mg of sodium per 3.5 ounce serving, which is a rather large serving at that. However, salt, or sodium, is an essential nutrient with many vital roles in the human body including balancing the fluid level of the blood, managing the body’s acid-alkaline balance, functions of the nervous system, adrenal function, stomach acid production and proper nutrient absorption in the intestinal tract.

Yet, anything good for you can be done in excess. The benefits of salt are not a free ticket to eat copious amounts of bacon, but unless you are overly liberal with the salt shaker, or are consuming a lot of high-sodium processed food, a daily serving of bacon with your eggs is likely not going to cause much of an issue.

But what about the nitrates?

Consumption of nitrates has said to be linked to cancer and other health issues, so many consumers will opt for “nitrate-free” or uncured bacons, but is that actually a better choice? Not necessarily. It may come as a surprise to many that nitrites are produced by your own body in greater amounts than can be obtained from food, and when it comes to food, vegetables are the greatest source of nitrates.

For instance, one serving of arugula, two servings of butter lettuce, and four servings of celery or beets all have more nitrite than 467 hot dogs. Recent studies suggest that nitrates may actually be beneficial, and comparatively speaking a couple slices of bacon will make up a very small percentage of your overall intake.

According to the Weston A. Price Foundation, “the traditional way to make bacon is dry cured through hand rubbing with a mixture of herbs, sugars, salt, and the sodium nitrite curing salts. Vitamin C in the mix helps form the nitrosylheme pigment that gives cured meats their wonderful red colour, and helps ensure nitrites convert to healthy nitric oxide and not carcinogenic nitrosamines. Traditional producers leave the bacon to cure for anywhere from a day to a month before slow-smoking it over applewood, hickory or other wood fires, generally from one to three days.

The extended curing time intensifies the pork flavour and shrinks the meat so that the bacon doesn’t shrivel and spatter as it cooks.  Flavour can vary quite a bit from producer to producer, and is determined by the ingredients of the cure, the method of smoking, and the timing.”

Unfortunately, today many commercial bacons use sodium nitrite, but not in a traditional way, often using liquid smoke and additives to create a quicker and cheaper bacon. So what is more important to pay attention is the quality of the pigs themselves, the additives and ingredients included, and the process by which the bacon was made.

Bacon is a whole food and when well sourced from quality farmers can most certainly be incorporated in a healthy well-balanced diet. As with anything, even too much of a good thing can be a bad thing, so moderation is key. Focus on whole foods, high-quality protein and fresh produce, and enjoy your bacon without concern.