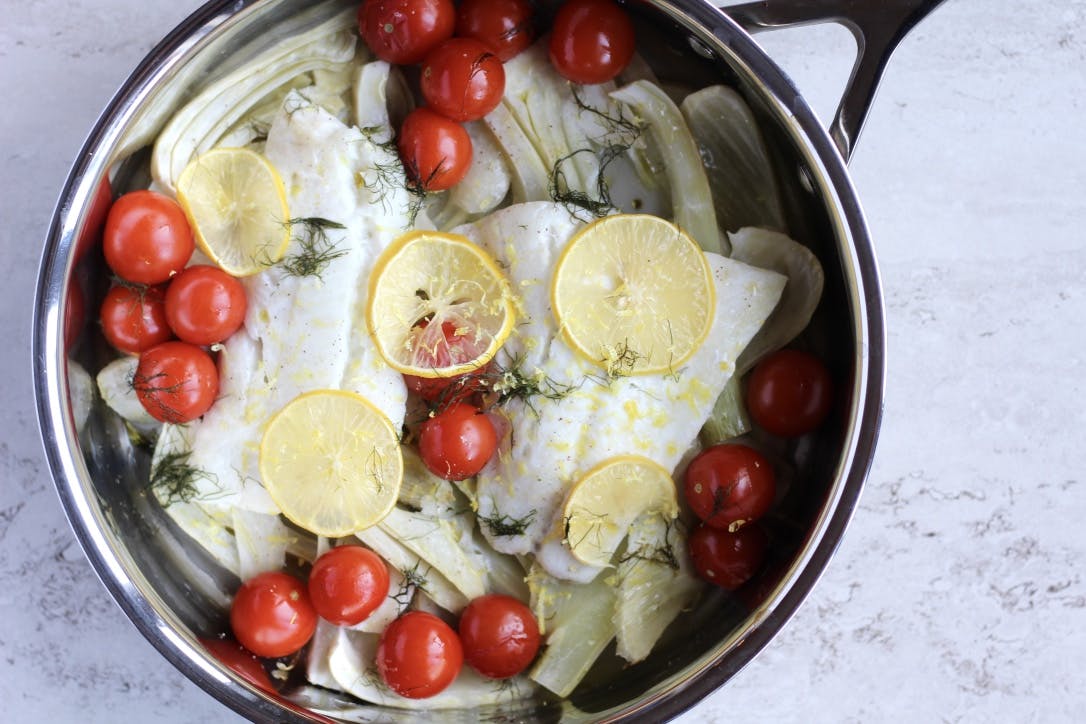 Oven-Roasted Cod With Tomatoes and Fennel

Sometimes the simplest recipes are the best recipes, especially on a warm summer night. This oven-roasted cod is an easy one-pan meal that is ready in a pinch with minimal effort!

2. Prepare the fennel. Using a sharp knife, trim the base of the bulb and remove the fronds (stems), these will be used for later. Cut the bulb of fennel in half, enabling to lay flat on the cutting board to slice. Thinly slice or shave the bulb into 1/4 slices.

3. In an oven proof skillet, lay the fennel slices in the bottom of the skillet. Add the cherry tomatoes (you can leave them whole or slice them), and drizzle everything with 1/2 tablespoon of olive oil and season with salt and pepper.

4. Transfer skillet to the oven and roast for 20 minutes. While the fennel and tomatoes are cooking, season with cod fillets with a pinch of salt and pepper.

5. After 20 minutes, remove from the oven and top the fennel and tomatoes with cod fillets laying them flat on top of the fennel. Drizzle with remaining olive oil.

6. Cut lemon in half and squeeze juice of half of the lemon over the fish and vegetables. Thinly slices the other half into rounds and add on top of the fish. Grab a small handful of fennel leaves from the stems and add to skillet.

7. Transfer to the oven for another 10-12 minutes, until the cod flakes easily with a fork.

8. Remove from the oven, and garnish with extra fennel leaves or lemon juice as desired.

9. Serve with a side of rice or potatoes.